“Theoretical knowledge is not important if not brought to practice in day to day life.”Swamiji Jitendra Das

Physical; mental; verbal towards oneself or someone else

Everything comes to us according to our behavior. If we act violently we will get violence (Karma).

We make the environment around us, doesn’t matter what is going on, we can change inside our thoughts, feelings and energy through deep breathing, which will bring clearance and peaceful speech, hearing and actions).

Speak truth, no lies. If hiding the truth, be quiet and do not say anything

If not sure about something, do not say anything. Do not lie to yourself, follow your heart and think carefully before saying something.

Do not still objects, ideas or energy from other people. Do not discuss trying to convince people about something and remember..

we can change ourselves but not others.

Sattva- sex with love where both are in consciousness

Rajas and Tamas- sex only for own enjoyment, not pure, not from the heart. Do not do it, practice brahmacharya and avoid losing energy.

A) Shaucha- internal and external cleanliness

B) Santosha- contentment / satisfaction (be thankful no matter what)

“Yoga should be practice without the Ego with humbleness. Without the Ego we are free to express ourselves and to allow God to live through us.” Swamiji Jitendra Das

Patanjali brought asanas to the knowledge of mankind.

Position has to be steady and comfortable.

5- Pratyahara (Control of the senses)

We have so many desires in our lives and usually when we fulfill these desires we are unconscious so they keep coming back over and over again. Instead if we do everything consciously we are able to control the numerous desires we have and truly fulfill them.

First step towards meditation, controlling the mind also body will be under control. When you achieve a high level of concentration you will naturally go into meditaion.

When you manage to control mind and body you will find subject and object only, no desires and disturbances, this is called meditation.

Yogi connects with all beings and becomes one with the whole Universe.

The closest surfer to the “peak” (the part of the wave that is about to or has just started to break) in on the “inside” and has the right of way. Any surfer should yield if he or she paddles for and catches the wave. It is possible for two surfers to split a peak that produces a rideable wave in both directions (one surfer goes left, one surfer goes right).

Commandment #2: Never, Ever Drop In

Related to Commandment #1 and arguably the cardinal sin of surfing, “dropping in” occurs when the surfer on the “inside” has the right of way and another surfer takes off in front of him or her.
Dropping in is to steal a fellow surfers wave. Not only is it annoying but dangerous, especially in more serious conditions. The wave is wasted, the surfer with right of way is angry and the offender (should) feels dumb. Don’t do it!
Importantly, it is not okay to drop in just because it looks like a surfer with the right of way won’t be able to catch a wave they’re paddling for or, if they are already up and riding, it looks like they will fall or the wave will outrun them.

Give your fellow surfers the benefit of the doubt and they will do the same for you.
There is no excuse for dropping in and we would all be better off if offenders of this rule would simply acknowledge they have made a mistake, apologise and not do it again.

Commandment #3: Don’t Be a Snake

“Snaking” a surfer in the line up is to paddle around someone in order to have the right of way. Again, this is stealing. Don’t do it; it is not clever.

Don’t paddle straight out through the center of action where surfers are catching and riding waves. In a beach break setup with multiple peaks, use common sense and avoid paddling out where waves are being ridden.

In some cases (e.g., you rode a wave in a set and came off with others waves in the set now breaking directly behind you), you can’t avoid being in the impact zone. Do your best to avoid getting in the way of another rider on a wave by either paddling wide or paddling behind the riding surfer towards the breaking peak or whitewash. Again, common sense will dictate the direction you take.

Commandment #5: Do Not Let Go of Your Board

It is dangerous to others, especially in a crowded lineup. If you can’t hold on to your board when a wave is crashing on you, you should not be out in the lineup.

Importantly, if a surfer is riding a wave towards you, letting go of your board is the worst thing you can do as the riding surfer will have no time to judge where to go and will surely hit you or the board or both. If you hold on to your board and either stop moving or continue paddling at the speed and direction, the riding surfer will have a much better chance of avoiding a collision.

If you’re just beginning the wonderful journey of learning to surf, don’t paddle straight into the line up of the best wave on the beach. Leave the best waves for more experienced surfers who have a better chance of appreciating them fully. Your time will come.

Commandment #7: No One Likes a Wave Hog

The best lineups are those where surfers are friendly and respectful, hooting each other into waves and sharing, regardless of ability or craft. It is irritating and rude when a lineup has surfers on more buoyant craft (e.g., longboards, SUP’s, kayaks, which are better positioned to catch waves further out to sea) who think that they are entitled to all of the waves coming through because their choice of craft enables it. Just because you can catch all the waves, doesn’t mean you should.

Surfers are human; we all make mistakes. You will drop in; you will get in someone’s way while they’re riding the best wave of the day. It happens. Acknowledge a mistake and respectfully apologize and don’t do it again.

Take only pictures, leave only footprints. Do not litter and go out of your way to pick up litter that a careless person has left. It makes you a better human.

Don’t forget why we surf; surfing is about having fun! 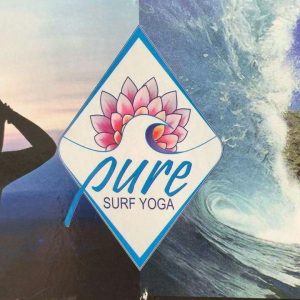